It sports a Brushless motor powered by two 18v batteries. It has what Makita calls the Automatic Speed Change. Which means it will adjust the torque and speed while cutting heavy duty material to maximize its efficiency and performance.

The saw is very small and light. It weighs in at just over 25 pounds without batteries. As you can see in the picture below it can be held over my head with ease. It’s well balanced for an easy carry.
.

Another great feature is the soft start. With this saw being as powerful as a corded saw, they added soft start, which gradually increases the speed so you don’t get a jump when the trigger is pulled. 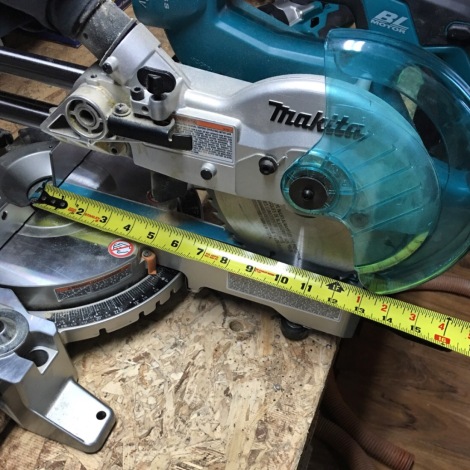 This saws slider depth is great. It can cut up to 12″ deep. And just over 3″ high on the fence. Now we did add a backing on the fence for cutting 3 1/4 material which is very common for baseboards these day. If you cut flat this won’t be a problem. But remember it is only a single bevel so you will have to rotate your material as you go. Which might be tricky if you are cutting in a small area. 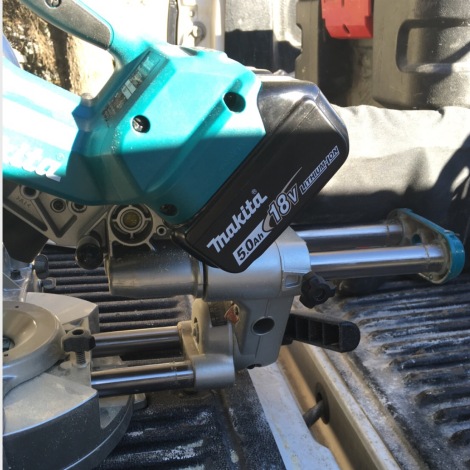 Makita has been adding battery gauges to their tools even though the new batteries are now coming with a gauge built in. This is a great feature if you have older batteries. Everyone hates only having enough power to make a couple cuts then having to run out to the work vehicle to grab a fresh one or two in this case.

Another feature is the great dust collection for being a slider. After chopping up 2x4s for a small framing job we worked on, we noticed a very small amount of dust on the the floor and a lot in the bag. They also made a V in the attachment of the bag. This helps so your saw dust isn’t dumping out while cutting or when it’s being transported. 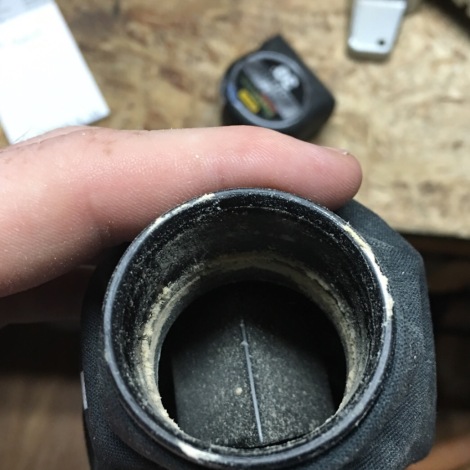 There is an adjustable depth stop which is great for Dado cuts.

One thing that we were disappointed about was this saw has no laser. Not that it needs it but it would be nice.

This saw is great, it honestly cuts like a corded saw. The fact that it is so small is nice for anyone who is mobile everyday and does trim work. If you get a chance to try it out you’ll be impressed with its speed and power.